PROTECTIVE FILM VS TEMPERED GLASS: WHICH IS BETTER?

UNBREAKABLE AND ANTIMICROBIAL:  THE NEW PROPERTIES EXPECTED BY USERS?

Screen protectors exist in all forms:

ProtectECRAN did the test for you!

POINT BY POINT ANALYSIS OF PROPERTIES

Due to its PVC composition, a protective film is unbreakable. Quality that tempered glass clearly cannot boast. Indeed, the majority of smartphone users criticize this characteristic for this most widespread means of protection.

The only dimension on which tempered glass takes precedence over a protective film is resistance.

Indeed, a tempered glass will remain more compact and more robust than a protective film.

While tempered glass distorts the design of your mobile phone or tablet, the protective film is almost invisible on the surface of your device.

Again, protective film trumps tempered glass. Indeed, the adhesive protection solution can be cut to size. It therefore adapts to the nearest millimeter to your model of smartphone, tablet, computer or even giant screen of touch terminals. Personalization matters.

One of the common features of ProtectECRAN protective films is anti-fingerprint.

What could be more annoying than seeing your device covered in fingerprints?

Tempered glass cannot compete with the protective film on this aspect.

As you will have understood, the duel between tempered glass and protective film is final.

With only one negative note, the adhesive protective film, here our PureSCREEN range, wins the fight hands down.

And you? Are you ready to take the test? 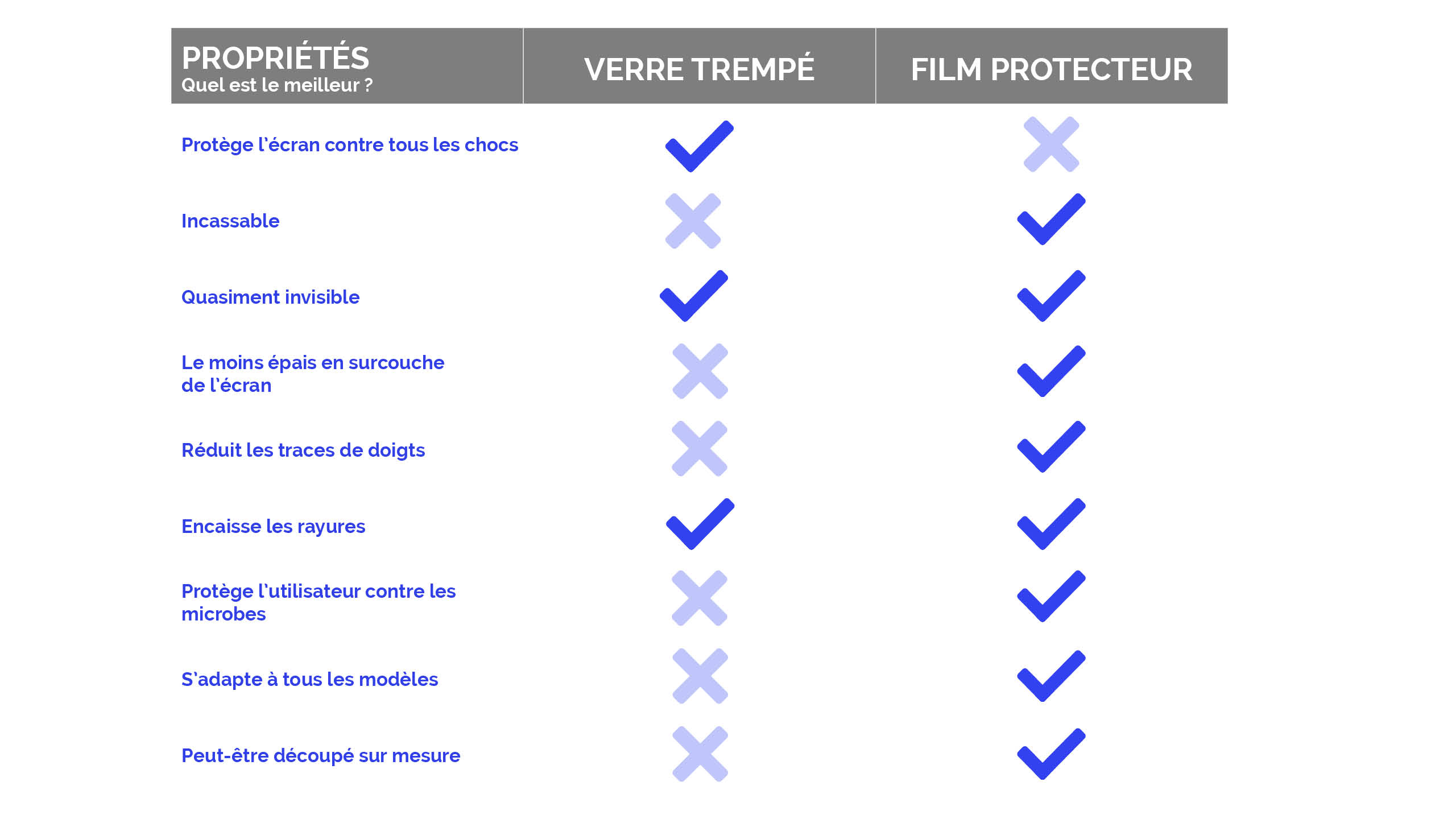 MICROBES, BACTERIA AND VIRUSES: WHAT DIFFERENCES?

By continuing to browse this site, you accept that ProtectECRAN and its partners use cookies to analyze the operation and effectiveness of the site as well as interactions through social networks.
Manage options ACCEPT CONTINUE WITHOUT ACCEPT Learn more
privacy policy

This website uses cookies to improve your experience when browsing the site. Of these cookies, the cookies categorized as necessary are stored on your browser as they are essential for the working of basic functionality of the website. We also use third-party cookies that help us analyze and understand how you use this website. These cookies will only be stored in your browser with your consent. You also have the option of disabling these cookies. But disabling some of these cookies may have an effect on your browsing experience.
Required Always on
Necessary cookies are absolutely essential for the proper functioning of the website. This category only includes cookies that ensure basic functionality and security features of the website. These cookies do not store any personal information.
Not necessary
All cookies which may not be particularly necessary for the operation of the website and which are used specifically to collect personal data from users through analytics, advertisements and other embedded content are called unnecessary cookies. It is mandatory to obtain user consent before running these cookies on your website.
Save & apply